Although there wasn’t a big music scene there, I feel fortunate to have gotten my start in Macomb, IL. At the “height” of it in Macomb, I was playing as a duo with my good friend Jill, whom I often credit for musically raising me. We played regularly at the Wednesday night open mics, often drawing a crowd of at least 20 or more. When we played the 3 hour Friday night shows, our crowd would often dominate the bar.

Whether it was a show or an open mic, we were an event. We had a big crowd almost every time we played. There was no “Jill & Dana” facebook page or bandcamp site, no email list, no “promotion” beyond a few occasional flyers. We didn’t even start recording until the last year we were together. And yet, every Wednesday open mic or Friday night show, we had a great big crowd of friends all singing along to damn-near our whole setlist. Not only did we have “draw”, but our Friday night shows always brought in at least $300-$600 from the door.

Sometimes I miss that. Don’t get me wrong, I’m absolutely in LOVE with Madison and the music scene here. But even after over 6 years in Madison, the only time my tunes have that kind of a crowd is if it’s an album release or a big event with a lot of awesome people on the bill. In a scene where there is just SO much awesome music happening, I do feel like my music has a crowd and has a home here. But even still, I can’t help but wonder: how the hell did we have such a big crowd of people going to our shows and knowing all the words to the songs, with virtually NO internet presence, NO recordings, and nothing more than a few occasional show posters?! 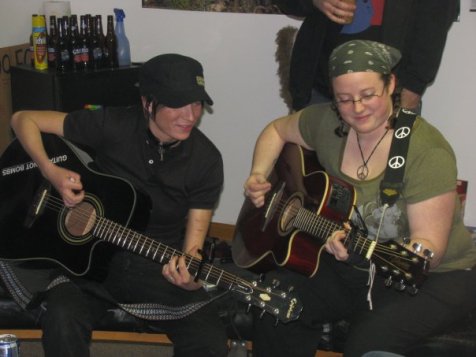 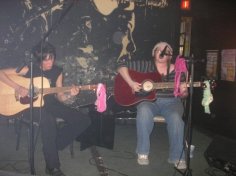 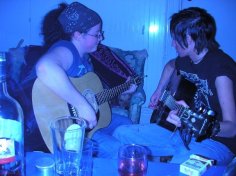 I think there were several factors involved. First of all, Macomb is a much smaller town, with limited choices for live music venues. The Cafe is the best, and usually sees a pretty great crowd. Even still, the crowd that came to see us often took over, so how did we get that crowd?

The “crowd” was simply a big collection of our friends, and friends of those friends. We lived together with others in a big party house, and every time it was party time, Jill and I had our guitars out. It was party time several nights a week of course, especially on a night we played the Cafe. We pre-gamed for a few hours, warming up at the house while people gathered. Then we went to the bar, often as a big group, either for a show or for open mic. We played and partied, then we partied some more at the house afterward, jamming until our fingers bled and my voice died. And so it went, for several years. Anytime there was a gathering at our house or another friend’s house, we brought our guitars, ’cause that’s just what you did. And when we played a show, it was just moving the party over to the bar and doing it on stage. Then back to the house until we’re too pooped to play and everyone passes out wherever they land.

So how did we get such a big “draw”? We literally called and texted our friends, told them we were playing, told them to bring their friends and come party with us. That’s pretty much it. By the time we actually started recording, lots of people who came to our shows already know most of the words to my songs because they seen us play so many times. That’s just…that’s beautiful. 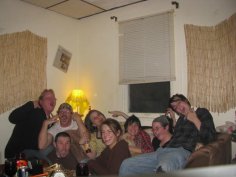 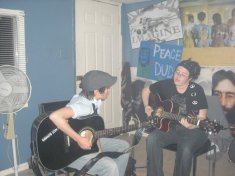 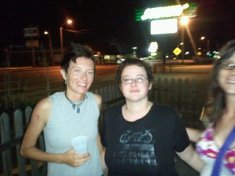 I think as “working” musicians that are trying to get their music “out there”, there can sometime be a disconnect between the Artist and the Listener. I think sometimes when musicians “promote” to their “audience”, it feels as if the “audience” is just this giant floating sea of heads we’re supposed to try and manipulate into coming to our shows or supporting our music. It feels like this as a musician who promotes, as well as a Listener and follower of musicians who promote. Maybe we need to get back to real things, real connections. The “audience”…it’s made up of people, individuals, many of which are likely your friends and family. Maybe instead of “promoting” your show, get in touch with your friends and personally tell them about it, old school style. Try and pretend it’s that magical time before Facebook and social media and alla that jazz.

As a musician, I like using Facebook and other online platforms to share what’s going on with as many people as I can at once. I also like it as a Listener, because I can see what my favorite musicians are up to and what shows are happening. But it’s not always accurate as far as what shows are happening; and as a musician, simply making a facebook event isn’t enough. It feels so impersonal, I feel like my “draw” is better when I personally invite my friends to my shows. Lately I’ve been sitting down and thinking who do I want to see at the show next weekend? If you receive an invite to a show, it’s because I genuinely would love for you to come hang out with me. And I know that as a Listener myself: if you call me or text me or send me a private message about your show, I’m way more likely to go to it. It tells me you want me there, not just a “draw”, ya know?

I want to work on bringing back the real, pretend social media isn’t a thing sometimes, pretend I don’t know shit about shit, don’t know how to work a computer, and just go old school. So you may start hearing from me outside of your Facebook feed. Could be email, private message, phone call, text, postcard, carrier pigeon…who knows, shit might get weird, just go with it, shh.